Why every business needs a Ben Zobrist #MVP 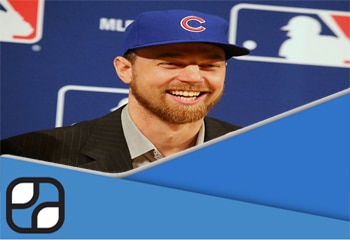 Every bleary eyed sports fan, casual or not, watched or is now learning about the historic comeback win for the Cubs.

This article isn’t about the win, not even about the organization – team – or even coaching – it’s about Ben Zobrist. If you don’t know who he really is, I’m going to share some highlights about why he is the ultimate team player. As a lifelong baseball fan I’ve dedicated all of my work tying baseball to business and how you need to have teammates, coaching and a plan. It’s called “Stuck On First” (more about that later).

Ben Zobrist is often called the “super utility man” and I’ve personally seen him play just about every position on the field except for pitcher and catcher. For the Cubs he was their 2nd Baseman until Javier Baez came along. Guess what Ben said? “I just come here to play baseball” and no whining about the position itself. Oh did I mention he’s a switch hitter and just won the World Series MVP? Oh and he’s won Back to Back World Series titles – just the 4th player ever to do this when switching leagues.

I’ve only met Ben as a fan while signing autographs so I can’t comment directly on what his work ethic is but I have no doubt following traits.

Every player and owner dreams about hitting the winning run in extra innings but it’s thousands of hours of work shown in the result split second decision and hit.

Chances are YOU are the super-utility man in your business and that means you do everything. You are the super sales guy, the accounting department, the delivery guy and the guy actually doing the work. Now imagine a business where all of that happens but you have Ben Zobrist clones – your staff, colleagues, partners, suppliers & contractors fill that role.

Did you see the others on the field, dugout & bullpen? I did.

That’s how you build a scaleable business – you take EVERYTHING that Ben does and break up the pieces and processes. Teach & Coach YOUR team to do all the things you do and get out of their way. Chances are really good they are capable (if you have the right players) and want to please their coach. They can’t do that without some training and guidance. Spend the time to break down their swing so they can replicate it. Let them fail and support them.

In a previous business we had a process for EVERYTHING. Client intake, Marketing, Sales, Production even Billing. Guess what? 80% of everything that went on did so without me. When you have 26 employees and hundreds of contractors that’s a feat in itself. I knew EVERY part of our business – BUT I DIDN’T do everything I let my team take care of it.

Be a Super Utility man just like Ben Zobrist – 2016 World Series MVP – just don’t be afraid to let others up to the plate too.

If you want to learn more about how I did it I would love to send you a FREE copy of my book. Just click this link and I’ll get one out to you but I asking you to pay some shipping. If that’s an issue just message me here and I’ll mail you one for free.